Once upon a time, the dwellers of a small village were terrified by the menace of a dragon that lived in the nearby caverns. They had 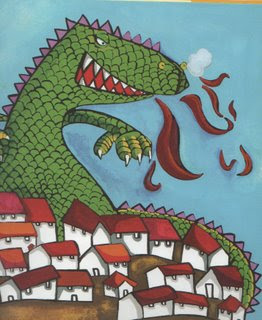 been afraid of the huge beast for lots of years, since it had once come down to the village asking for food. First, they gave it their chicken, but these were far too small to soothe the dragon's hunger, so it soon asked for more. The villagers thus decided to give away their sheep and goats. Still, these were not enough to fill the stomach of the beast. Desperate, the people gave away their cows, but they soon finished too. The dragon was never fulfilled and it was greedy for food. Some time passed in which the villagers could offer it nothing, so it went down to the village and made this dreary request:
-You shall give me one of your children everyday. Should you not fulfil my desires, this village will be swept away forever by my fury.

And to demonstrate its power, he set one of the village's houses in flames with the fire blowing from its nostrils.

There was nothing to do but to obey. However, who was to be given away? Sure enough everyone was scared and unwilling to be eaten by such a beast. Therefore, something was to be done.

Someone proposed that fortune should choose who was to be given to the dragon. The king of the village approved this solution. The names of all the young people of the village were written down and put into a bag. The king himself took one of the pieces of paper and went suddenly blank. He was to give away his very own daughter, the most beautiful lovely girl the world had ever seen.

When she knew the sad news, the princess cried desperately, but she bravely accepted her destiny. So she said goodbye to everyone and set for the dragon's den.

Soon after the princess had left, a handsome knight clad in a white costume with a red cross on it and armed with a sword and a white shield with a red cross (Catalan version: the shield has a Catalan flag), reached the village. When he saw the gloomy looks in the villagers' eyes, he quickly asked the reason they were so sad. The king, who was clearly the one that looked more depressed, told him about the beast and the terrible fate that was about to fall upon his beloved daughter. The knight did not hesitate a second about what he should do. He promised the king he would bring his daughter back safe and sound and rid the village of the dragon’s menace. He then galloped to encounter the beast in its lair. 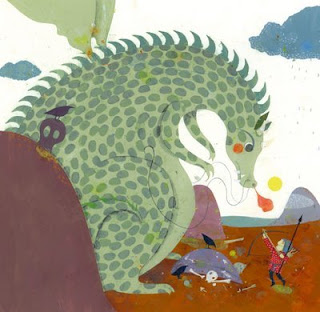 And no sooner could he have arrived. The scene he saw as he approached the cavern was terrifying: the beast was slowly moving towards the princess, its eyes fixed in the beautiful girl as he imagined what a tasty meal she would be. Jordi -for this was the knight’s name-pushed his horse forward, as he drew out the sword that had served him so well in the right hand. With the sound of metal and Jordi’s war cry, the dragon’s attention was distracted. It swayed its head towards the knight and with an angry look, it blew a ball of fire towards him. Jordi had expected this, and his shield was ready to stop the first attack. Fear had now left him, and courage was the only guide of his acts. He was a fast and experienced swordsman, so he gave a quick blow that the dragon could hardly avoid. However, the beast quickly reacted and threw his mighty long tail towards our hero. His horse was badly hurt, and he fell down from it, but he immediately regained his position. The dragon was now looking him right in the eyes.

Jordi then took a risky decision, which was in fact his only possibility. He threw himself towards the dragon's mouth, as it prepared the definite fire blow. However, Jordi “quickly” moved to the right side and down under the beast's body and-with all the strength he was able to gather-stabbed the dragon right into its heart. The dragon screamed with all its might and collapsed. Jordi was only inches away from being killed by the enormous falling body. 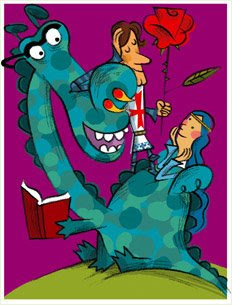 The princess ran to aid his saviour and embraced him. And then, magic happened: from the pool of red thick blood coming from the dragon’s heart, a rose tree sprouted. Little by little, the tree drank the dragon's blood and brilliant wonderful red roses appeared. Jordi approached the tree and, carefully avoiding its spines, took the biggest and more sweetly-perfumed rose to give it to the king's daughter.
This is the reason why, from that day, the 23rd of April of every year, when spring bursts, Catalan men give their beloved princesses a red (sometimes multicolour) rose. As to why girls offer books to their knights in return that same day, there is no legend as far as we have been able to discover.

*Authors' note: this legend is also in other places where Sant Jordi is a patron, ie: England (Saint George) and Aragón (San Jorge).
Publicat per Anna

Very interesting. Didn't know that there was a dragon involved. Must be quite an old tradition.

Its great! Thanks for sharing. It took me long to find the story behind the celebration

the reason why "knights" receive a book, is because April 23rd is also the day Miguel de Cervantes - author of the Don Quijote, one of the most important books in spanish literature - died. 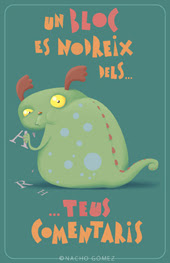