Four red stripes on a yellow background: this is the "Senyera" or Catalonia's flag, a symbol of identity with too many socio-political implications. But today I am only going to talk about its origin.
Legend says that the flag comes from the 9th century. At the time Catalonia did not exist as we know it today: the northern half was composed of different counties and the southern half was part of the Muslim Caliphate of Córdoba.

The story tells that Guifré el Pilós ("Wilfred the Hairy"), count of many Catalan counties, was helping the Frank king Carles el Calb ("Charles the Bald") to fight the Normans and was mortally injured. The king approached the count's deathbed, and Guifré asked him for a coat of arms. The king then soaked all his fingers but the thumb into the count's open wound, and pressed and moved them down on the surface of a golden shield, thus creating the emblem of the four stripes on a golden/yellow background. 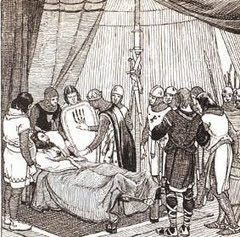 This could be a typical picture to illustrate the legend of the Senyera
Real history is far from that. Only by knowing that Carles el Calb died some twenty years before Guifré el Pilós, one knows that the story cannot be true. Besides, sources say that it appeared for the first time in a XV century book. The true history however, is not still clear. One thing is for sure: some bear a relationship with Guifré el Pilós (the legend had some truth in it after all!). One of the theories says that it has its origin in 878, when Guifré was invested count of Barcelona, whose symbol included the red stripes and the golden background. A second theory argues that it is a primitive coat of arms from the counts of Carcassone in France, who were descendants of Guifré el Pilós. And even a third theory exists, in which the origin of the Senyera is attributed to the Pope: red and yellow are papal colours and Aragon and Catalonia were his champions. Hypothesis left aside, what we now for certain is that the earliest proof of the Catalan coat of arms is a minting from count Ramon Berenguer IV in 1150.
As I have pointed out, Catalonia as such was not an entity in medieval times. First it was little counties in the north and part of Córdoba's caliphate in the south, then the counties united, afterwards, Aragon and the counties did so too and formed the crown of Aragon, later Muslims were expelled from the South of Catalonia and the conquest of Valencia, the Balearic Islands, Sardinia and the south of Italy began. It is for this reason that other flags in the areas I have just mentioned have the same basis as the Senyera. The four stripes on the golden background, representing the old crown of Aragon, also appears in the coat of arms which forms part of the Spanish flag, together with symbol of other old reigns in the Iberian Peninsula.

That's a really nice version of the senyera by Kukuxumusu.

One thing I've noticed about flags that have the colour red in them is that there will usually be a myth or a legend about blood being used to create it... and I must say, the legends are quite interesting even if they're not quite accurate.

Isn't it curious that you never stop learning things?
I say so because I consider myself kind of an initiate in Medieval Catalan history, but I didn't know the possible true origins of the Senyera, not to mention its first use by Ramon Berenguer IV.
Maybe it is because the legend preserves that smell of romanticism and heroism which is not reflected in History...