There's not only one Catalan

If you are learning Catalan don't panic with the title! It only means that, as any other language in the world, Catalan has different accents and dialects. I particularly find this subject amazing; I already found it interesting when I was at high school and I barely had heard any other dialect or accent other than the one in my area. However, on my arrival to Barcelona at 18, my ears filled up with different Catalan varieties and I was listening very carefully to all the new people I met to catch up all the details that, up to that moment, I had only read in school books. I was an avid listener. Now, at 27, I still do it. I can't help it, I love it. And I think it is wonderful to have such richness and explore it. And here is what I will do today: setting the basics of Catalan dialectology!
Catalan-speaking areas Catalan is not only spoken in Catalonia. In fact it is spoken in other regions of Spain, namely: La Franja de Ponent ("The Western Strip", Aragon), the Balearic Islands, the Valencian Community and in one place in Murcia called El Carxe). And, furthermore, it is also spoken in "Catalunya del Nord" (Southern France); Alghero, in the Italian island of Sardinia; and Andorra. Together, this make a rough total of 9 million of speakers and 2 more million more who do not speak Catalan but understand it. And there also a few learners around the globe :).

Catalan-speaking areas
Western and Eastern
Mainly, there are two dialects in Catalan: Western and Eastern. This division is based on a very tangible difference: lack -Western- or presence -Eastern- of the schwa vowel (the schwa is also found in English, for example, the way the "e" is pronounced in "computer"). In other words: if "a" and open and closed "e" are turned -Eastern- or not turned -Western- to schwa in weak syllables.

There are other differences of course, but the most obvious and easily heard is this one. 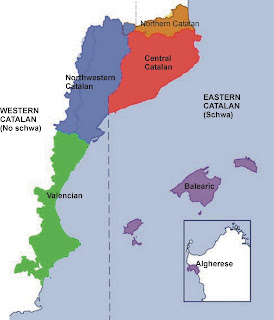 The official 6 dialect distinction
Let's make it more real: the 12 dialects distinction
Drilling down we even find that the 6 dialects distinction can't fit all purposes. This was what drove some professors of the Autonomous University of Barcelona (UAB) to publish a book with the specificities of 12 subdialects to help language assessment in the media. This distinction is more real, but still, in my opinion, it is too general in some cases and a bit misleading in the terminology. 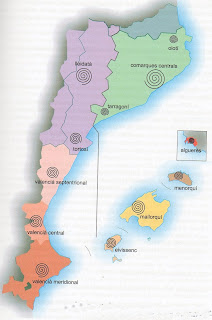 I like to include myself somewhere in-between "olotí" (or transitional northern Catalan) and "the Catalan of Girona (not in the maps, part of Central Catalan). And my boyfriend is from Andorra, thus, his is a Northwestern dialect (he says "Andorran" :P). Schwa and not schwa in the same flat. He's one of my objects of study haha!
And with this variety... isn't it difficult to understand each other?
Not at all. Though some varieties might be hard to pick phonetically at the beginning (especially Balearic), after you get used to it, no one really needs to change their pronunciation much. Maybe some words are changed from a local to a standard form... but not big deal.

Accent and dialect
The concept of "dialect" in Catalan is not really the same as in the case of German or Italian, where their dialects are much more different among each other and a standard is really needed to make people from different dialects understand each other. In Catalan, there is one standard variety (and substandards in the Valencian Community and the Balearic islands), but there is not really needed in casual speech in a conversation with people who speak different dialects.

Accent is only restricted to phonetics, whereas dialect includes lexical and morphosyntactical characteristics. Thus, you could argue that Western and Eastern are accents and dialects at the same time, that there are 6 main dialects, 12 subdialects and many local accents.

I leave you with a test. Could you guess if these singers are Western or Eastern? (Catalan readers... don't tell :P)

Hope you enjoyed it! Next posts real examples with Catalan people. Any Catalan-speaker wants to help me make an accent map? Drop me a line :)
Publicat per Anna 5 comentaris: